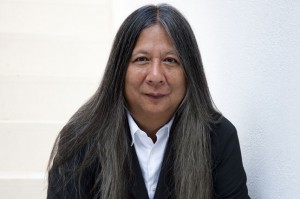 After 30 years of launching stunning designs at the esteemed London Fashion Week, one of Ireland’s most acclaimed designers has announced he will be retiring from the annual event.  John Rocha, a native of Hong Kong, has been a pillar of the Irish gift, fashion and design world since he moved here in the 1980s after graduating London’s Croydon School of Art.  His influence on Irish design is profound and he has created clothing, crystal and jewelry.  He also works in interior design.

Whatever the medium, Rocha’s work is often rooted in his passion for hand crafts, particularly beading and crochet, while also being cutting edge and completely fashion forward.  While he is retiring from showing at the London Fashion Week, he will continue his other design work, apparently including his successful retail clothing enterprise and his work for Irish department stores.  So Rocha’s work and influence on Irish gifts and design will continue.  His daughter Simone is also a fashion designer, so fashionistas have another Rocha to keep an eye on.

At first glance, Rocha’s designs don’t scream Irish.  His interiors, which include Dublin’s popular Morrison Hotel and apartments in London and Budapest, particularly are very sleek and minimalist with an earthy but modern feel.  His pottery for Debenham’s department stores is also very simple and sleek, but the milk white color does evoke images of the once common site of glass milk bottles on Dublin doorsteps.  But Rocha chose Ireland.  He could live and find inspiration nearly anywhere, and while he owns property elsewhere, Dublin is where he made his home.  And Ireland has embraced him and followed his success with great pride.

Rocha’s career has spanned not only a wide range of media but a few decades.  In that time, he’s won numerous awards and been knighted as a Commander of the Most Excellent Order of the British Empire (CBE) , a title that is not reserved for British subjects.  He won the Ernst and Young Irish Entrepreneur of the Year award in 2008.

In 2010 An Post (the Irish Post Office) issued a set of postage stamps featuring six spectacular Irish designers, including John Rocha.  The others were Paul Costelloe, Louise Kennedy, Lainey Keogh, Orla Kiely and Philip Treacy.  They also put on a display celebrating their work at Dublin’s historic General Post Office – the GPO where the leaders operated during the 1916 uprising.

Contemporary Irish designers are not often given their fair dues.  When people think of Irish gifts, design and clothing, they generally think of very traditional looks – festive shamrocks, elegant trinity knots, detailed Celtic crosses and Aran knitwear, crystal and linen.  But Ireland does have a more contemporary school of fashion designers who are influenced but not restricted by our rich cultural heritage.  They are creating new looks that blend tradition with other influences and their own unique visions with clothing, accessories, crystal, jewelry, pottery, interior design and much more.

Going Gaga for the GAA


Three Chances to Celebrate Irish Heritage at Your Wedding