For obvious reasons, the Irish are experts at dealing with wet, cold weather.  In the autumn, as the rain falls and the air grows chilly, nothing feels cosier than putting on a nice, thick Aran knit sweater and enjoying a cup of tea.  Merino wool can stand up to pretty horrible weather.  Remember, its original wearers spent all day standing out in the rain without a bother.  It is actually used in some performance wear clothing for hikers and mountain climbers because it regulates body temperature rather than just keeping you warmer.

Named for the stunning islands off the coast of Galway, the Aran sweater not only keeps you comfortable, it keeps you in touch with your roots.  These amazingly detailed sweaters have been knit with love down through the generations, and they remain among the most enduring Irish gifts today.  (And they really will endure!  Aran knits are built to last, unlike flimsy fashions that survive just one season.)

Which Stitch Is Which?

Traditionally Aran sweaters are cream-colored or fawn, although now can be found in other colors too.  But the complicated knit stitches are the hallmark.  Many knitters and Aran sweater lovers have their own favorite stitches, and traditional Aran knits feature several different ones.  Do you know which stitch is which?  Here’s a quick guide to some of the most popular Aran knit stitches you will see on a range of knitted Irish gifts.

Aran knit sweaters and cardigans have always been popular and practical Irish gifts, and when you know the terminology, you can ask about the patterns you like the best. 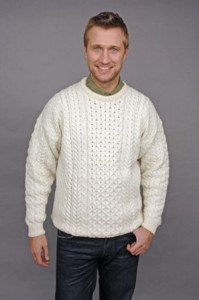 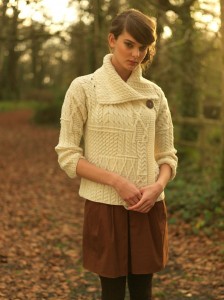 The Ultimate Source For Everything Irish!