Before Ireland Was Green

1053
1
By IrishShop+
1 year ago
In Ireland Information 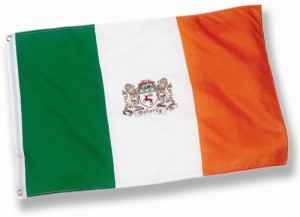 Today, we associate Ireland with green – with 40 shades of green in fact. Irish gifts are adorned in green shamrock designs, woven from green wool or tweed or fashioned from green clay. But once upon a time, Ireland’s fields were green but our national color was actually blue.

Before tourism touted the 40 shades of green, before the tri-color flag or the starry plough was designed, Ireland’s color was blue. That was because the nation’s patron Saint Patrick, was also associated with blue. (Actually, the starry plough flag was originally designed with a light blue background by none other than Countess Constance Markievicz.)

In early Irish mythology, Flaitheas Eireann was a female figure representing a sovereign Ireland. She wore a blue robe. Henry VIII declared Ireland a kingdom in 1542. He assigned a crest featuring a gold harp on a blue background, taking the color of Flaitheas Eireann’s robe to represent Ireland. The Irish government still uses the gold harp on a deep blue background on official documents, and many official government buildings feature blue carpets.

George III established an order of chivalry, the Order of St. Patrick, in 1783. As the Order of the Garter was using a dark blue, light blue was used for this new Irish order. The shade became known as St. Patrick’s blue. The order still exists, although it only has two members: Queen Elizabeth and one officer. But it has links to St. Patrick’s Cathedral in Dublin, where the choir wears blue robes.

Of course, County Dublin’s official colors are dark blue and light blue. Irish gifts from Dublin often feature those colors.  So blue has a strong association with Ireland.  So what changed? When and how did green take center stage as our national color and even the color we now associate with St. Patrick?

When Did Ireland Go Green?

Blue wasn’t exclusively used for Ireland, though. As the struggle for independence grew, the fact that the British also used blue became more of an issue. The cause needed a more distinct look, and Ireland’s lush green landscape provided the inspiration. In the early 19th century, green gained prominence as the color to symbolize Ireland.

Thomas Francis Meagher, a member of the Young Irelanders, is credited with developing the green, white and orange flag that now represents Ireland. He stated that the green represented the Catholic community, the orange symbolized the Protestant community, and white was for peace between the two. From there, green flourished and quickly became the color the world associated with Ireland.

Today, when people around the world think of Irish gifts, they picture green shamrocks adorning jewelry, clothing, tea sets and more. When Irish national teams play, the world sees them kitted out in green uniforms. Even St. Patrick has had a make over and now wears green. But blue hasn’t gone away. Irish jewelry features deep blue stones. Irish pottery also embraces blue. And of course, the national’s capital is represented by dark and light blue.


School in the Land of Saints & Scholars