1116
1
By IrishShop+
4 years ago
In Ireland Information 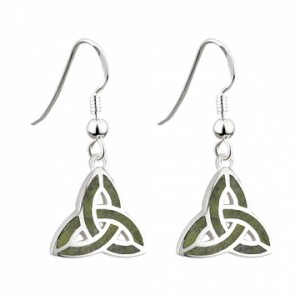 What is it about the number three?  In stories, fairies and genies grant three wishes.  Goldilocks met three bears.  Three little pigs built different houses.  Blue, red and yellow are the three primary colors; all other shades are blends of those three colors.  They say good things come in threes, and that is definitely true when it comes to the traditional designs on many Irish gifts.  Three different iconic symbols of Ireland have a pattern with three parts!

The number three is significant in many cultures, and triple deities have been worshipped around the world.  Ireland is not unique in this.  What is it about the number three?  All stories have a beginning, a middle and an end.  Trilogies are popular in both books and movies.  A stool with three legs is stable.  Perhaps three suggests completion or balance.  Then again, anyone who has ever found themselves in a love triangle can attest to the unhappy aspects of the number three.

Mostly, the number three is considered very lucky.  We’ve all heard the phrase ‘the luck of the Irish’.  Maybe that’s part of why we have so many symbols reflecting three!  Does someone you love need some good luck and good wishes?  If you are looking for Irish gifts to say ‘good luck’ and wish someone well, especially if you’d like something with some spiritual significance, look for something with one of these iconic Irish images: the shamrock, the trinity knot or the Newgrange triple spiral.


Back to School Irish Gifts