With Irish rockers U2 making headlines for their tour, which is in their hometown of Dublin for the week, we’re looking at three of Ireland’s greatest gifts to the modern world, kicking off with the world’s biggest band of the last 30 years.

Arguably the biggest band on Earth since The Beatles. Bono, The Edge, Larry, and Adam are known and loved the world over. They enjoyed some success in the early 80s across Ireland and in Britain, before Bono’s appearance on Bob Geldof’s charity Christmas single Feed The World coupled with the release of the hit album The Joshua Tree transformed them into one of the world’s biggest acts.

They followed it up with continued success in the 90s and early 00s, before proving they can still remain relevant and provoke front page controversy through the release of their latest album Songs of Innocence in association with Apple.

While some of that famous Irish begrudgery can be at display at times from natives overexposed to them, the reception U2 get whenever they return home shows just how proud we are of these four lads from the northside of Dublin.

The black stuff. Surely Ireland’s most famous and well loved brand. US President Barack Obama famously downed a pint while visiting the hometown of his great-great-great grandfather Falmouth Kearney. There will be foul mouths all around after a few too many pints of this!

One of the most common complaints of Irish people abroad is that the Guinness just doesn’t taste the same as it does back home…and they’re right. There’s nothing like a pint of the black stuff in the Emerald Isle.

One of the best reviewed tourist attractions on this small island of ours is the famous Guinness storehouse. Such is our penchant for a drink, the church where Arthur Guinness (inventor and founder of Guinness) was married over 300 years ago is now a pub! 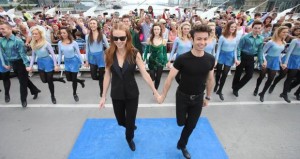 In times of trouble Ireland has a history of exporting her young. Be it through famine, war, or a struggling economy, young Irish men and women have left with a heavy heart to seek a better life elsewhere throughout the centuries.

Yet despite missing the ‘old country’. We make an impact wherever we go. It’s not called ‘The Land of Saints and Scholars’ for nothing! The famous Irish wit and wisdom is always packed away in the suitcases no matter the trouble and as a result there are people spread all over the globe with a proud Irish heritage, keeping the spirit of their ancestors alive.

You can find a mix of our finest exports in the Irish Pubs that litter pretty much every major city in the world. Chat to the staff, have a pint of Guinness, and listen to the great music…although it’s probably a little more diddley-oi than U2!

To the rest of the world from Ireland and all those with Irish heritage: tá fáilte romhat…you’re welcome!

We’ve given our gifts to the world, why not get an Irish gift for your a friend or family member with green blood? Browse through our great range of products here at Irish Shop.