Halloween, like a great many things in the USA, Canada and Australia, has roots in Ireland.  The holiday is one of many cultural Irish gifts now enjoyed around the world.  Before our modern celebration of all things ghoulish and ghastly, there was Samhain, the Celtic New Year.  In pre-Christian Ireland, the belief was that as one year ended and the next began, the veil between the living and the dead was thinner and more porous.  The ancient Celts did not believe the dearly departed really went all that far, but rather stayed close to home, unseen and unnoticed… for most of the year that is.

Samhain was also a time for predicting the future, fortune telling being one of our less tangible Irish gifts.  As the old year gave way to the new, our Celtic ancestors were on the lookout for signs of what was to come.  The harvest was in, and it was time to start thinking of the year ahead.  Some of the old fortune-telling traditions were still an essential part of Halloween up to 50 years ago, and they have not died out completely.

If you are looking for Irish gifts for the Halloween season, a barmbrack or a tea set with some loose tea for reading the leaves is perfect.  And you can’t go wrong if you include some lovely Irish kitchenware with that barmbrack.

It’s always nice to bring something along for the host or to share when you are going to a party.  Halloween has its roots in Ireland, so Irish gifts make complete sense while also being a bit out of the ordinary.  Whether you go with something seasonal such a barmbrack and tea set or something more personal such as jewelry, embrace your roots this spooky season and enjoy!

IrishShop.com is the ultimate source for All Things Irish! 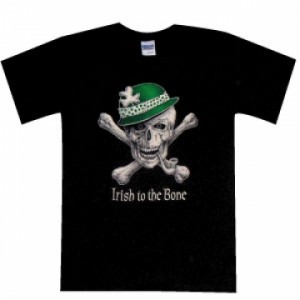 Irish T-Shirt – “Irish to the Bone”