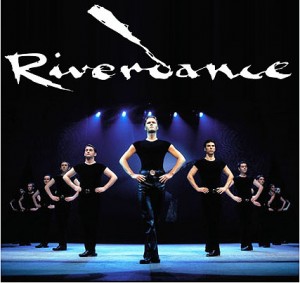 Children who were born in the same year as Riverdance are now old enough to be college students driving their own cars.  While the show itself appears to be ageless, it is now 20 and an anniversary tour is underway.  It has been seen live by more than 25 million people, including Twiggy, Robin Williams, Whoopi Goldberg, Val Kilmer, Madonna, Andrew Lloyd Webber, Boy George, Diana Ross, Barry Manilow, and Meryl Streep.  It has revived Irish dance to the point where it is now a standard childhood activity in many parts of the world.  Arguably, it is one of the most popular and widely loved Irish gifts this island has ever given the world.

Riverdance began as the interval entertainment for the 1994 Eurovision Song Contest, which was held in the Point Theatre in Dublin.  The Eurovision competition is held in a different European city annually, and while little known in other parts of the world, it is enormously popular throughout Europe.  Riverdance is one of Eurovision’s major success stories despite not being an entry in the competition itself.  It was such a resounding success, the audience at the Point Theatre gave it a standing ovation and the BBC requested a performance for the Royal Variety Show.  From there, Riverdance’s popular mushroomed and the show has inspired people of all ages around the world to take up Irish dance.  It has played to sold out crowds around the world, leading many to discover more cultural Irish gifts such as our legacy of literature and music.  Riverdance propelled Irish American dancers Michael Flatley and Jean Butler to fame that spread far beyond established Irish dance circles.

Irish dance has always had a solid following in Ireland, on par in popularity with ballet and gymnastics in the United States.  It has been taught in schools and in dance academies.  Dance mammies in Ireland have been fussing over shoes and wigs for a very long time, and beaming as their darlings donned their stunning costumes and danced their hearts out in competitions and cultural events.  Now parents around the world have joined them in the search for the best shoes, the ideal dance gear bag to please their little star, and the shuttling around to and from lessons and practices where their little ones have made friends, learned self-discipline and gotten fit.

Has Riverdance taken over the world?  Well, there is an app available to tutor you in dance steps and the show has travelled all over the globe. Irish dance schools exist in places where few even knew about Irish dancing 20 years ago.  Jean Butler has gone on to launch a line of stunning jewelry.  It is one of those Irish gifts to the world that has very few detractors.  This year for the show’s 20th anniversary, the current Riverdance cast led by Maggie Darlington, Brendan Dorris, James Greenan, Lauren Smyth, Callum Spencer and Chloey Turner is on the road again, conquering new and returning fans and inspiring tomorrow’s Irish dance stars.

The Battle of Clontarf Then and Now


Going Gaga for the GAA