1126
0
By IrishShop+
4 years ago
In Ireland Information 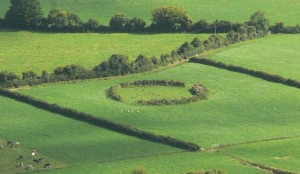 Ireland is full of well-known destinations and heritage sites. In fact, this island is so full of heritage that a lot of it is tucked away and forgotten by all but those local to the area. One of the great Irish gifts and joys of traveling around the countryside is spotting a neglected, ruined abbey or a holy well or other site. The most magical find is, of course, a fairy ring.

Leprechauns are the small, magical creatures most associated with Ireland, and they feature on countless Irish gifts, but they certainly aren’t the only wee, supernatural types living on the emerald isle. Fairies might even outnumber leprechauns, but we’ll never know for sure as neither participate in the national census. While leprechauns are prone to mischief, fairies tend to leave more evidence of their presence, primarily in the form of ring forts.

What is a fairy ring fort? It is a ring of stones, the remains of an ancient structure that is long gone. While humans might have built the original structure, fairies took over when the forts became neglected by people. These forts remained dotted around rural Ireland, and are usually on private property. That means there are two dangers in trying to visit them – one worldly and one other worldly. Property owners and their livestock have strong feelings about strangers appearing and opening their gates. While a property owner might sternly order you off the land, a bull is more likely to simply charge at you, and they are surprisingly fast.

The other danger is more sinister – the fairies themselves. Now, they are usually amenable to respectful visitors, but it is important not to touch or otherwise disturb the stones of their fort or any plants around it. They will extract their revenge, and you could wind up returning home with entirely the wrong sort of Irish gifts – fairy curses. Some people believe that all fairies are eager to curse any human who approaches, but quiet visitors who do not disturb the forts suffer no unfortunate consequences.

It is possible to safely visit fairy forts. You simply need to find one on property that allows visitors. They are all over the country, so if you are visiting you can simply stop by the local tourism office, where you’ll also find a variety of Irish gifts, and ask about seeing local fairy ring forts. County Kerry is a particular stronghold of the fairies, and has many of their ring forts. Some properties have occasional public tours, such as Uisneach in County Westmeath, while other ring forts are on public lands. There are even a few B&Bs and outdoor adventure centers with fairy forts.


Inspired to Explore Your Musical Heritage?