458
1
By IrishShop+
12 months ago
In Ireland Information 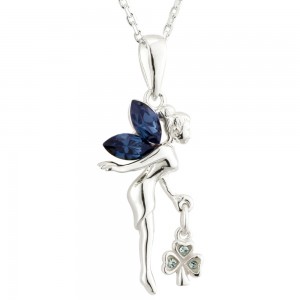 Traveling through the Irish countryside, you’ll often spot a lone hawthorn tree in the middle of a pasture full of cows or sheep. Sometimes it is fenced off to protect it from livestock. In other areas, you will find hawthorn trees festooned with an array of colorful and sometimes bizarre tokens including hair clips, baby’s pacifiers, socks, small toys, candy wrappers and everyday scraps. You’ll also see coins pushed into the bark. These are Ireland’s fairy trees, and they are very special places.

Fairy trees have been in the news in Ireland this summer because one of the most famous ones in the country has fallen. The ancient hawthorn at the Hill of Tara fell after so many tokens were left that they damaged it. A second tree at Tara  is in danger of the same fate.

Fairies and Their Magical Irish Gifts

Fairy lore is one of the most magical Irish gifts. No one is sure why fairies prefer hawthorn trees, but everyone knows that they do. The hawthorn is one of their main entry points to the other world, the fairy realm. That’s why people seek them, and why people avoid them. In general, fairies can be quite irritable if annoyed, but they can also be moved in some situations to grant wishes. People leave little tokens when they make a wish.

It’s not like Aladdin’s magic lamp. Fairies are more subtle. Centuries ago, people believed that you could ask a fairy to cure an illness and if you left a bit of cloth tied to the tree, the illness would fade away as the cloth decomposed. (And that is just one reason it is foolish to leave plastic tokens. They will never decompose, so you will never get your wish!) Sometimes, a fairy will help someone avoid a danger they had no idea was even there. They might move a nail out of a road or distract a vicious dog when you are walking past. Fairies might whisper in the ears of the best local musicians to gather at the pub for a trad session while you are there, or they might make sure your train arrives on time.

How to Help the Fairies

Today, we’ve moved a long way from simple cotton or wool cloth being tied onto branches. People are putting all sorts of things on fairy trees, many of which will only annoy the wee people. Coins being pushed into the bark are especially harmful. A tree’s bark is like skin; it protects the tree from germs and infections. Fairies certainly don’t need human money, so damaging their trees with coins is more likely to result in some very bad luck than in a wish being granted.

If you want to help the fairies and protect their hawthorn trees, it isn’t hard. All you have to do is respect them. Think carefully about any token you leave. Make sure it is biodegradable and won’t hurt the tree. Keep it small, and make sure you don’t damage the tree with it. Don’t climb fairy trees. They are likely to push you out. But fairies do love respectful, quiet visitors. They share the same Irish gifts of hospitality that Irish people have. By all means, visit their hawthorns and make a wish. Sit in the shade for a bit, and you might even see one flying past you.

Giant’s Causeway: the Science & the Story