School in the Land of Saints & Scholars

856
1
By IrishShop+
2 years ago
In Ireland Information 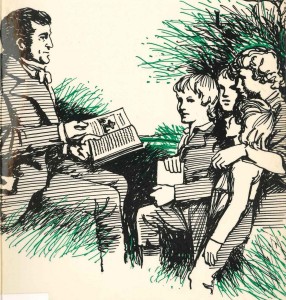 Our cultural Irish gifts are often summed up in the phrase ‘the land of saints and scholars’. Ireland is known for its literary heritage and its religious art such as the Book of Kells. Today, Irish children like youngsters throughout the western world, have mixed feelings as they head back to school. They’re excited to see school friends and discover what the year will bring. They’re proud of moving up a grade. And they are also reluctant to give up sleeping late and playing all day for homework!

Today, approximately 90% of the Republic of Ireland’s primary schools are run by the Catholic church. That is changing as secular education becomes more popular. We might think of Catholic schools as old and established in Ireland, but that is a short-sighted view. During the Penal Laws, Catholic education was actually illegal. This was the era that gave us the penal rosary, a one-decade string of beads easy to conceal from the authorities. Now these are popular religious Irish gifts, but once they were a tool of devotion and defiance. Between 1695 and 1782, the law specifically forbid using buildings to teach Catholic children.

The Irish are known for our determination, and those oppressive decades demanded it. Instead of sending their children off to a warm, dry school building in the morning, rural Irish parents sent their children out in the evening, after a hard day’s work on the farm, to secret schools. These were known as hedgerow schools because they were often literally held in a hedgerow, with the teacher and the pupils sheltered from sight by the dense shrubbery. There in the damp, they learned to read and write. They studied math, Catholic catechism and even Latin. They spoke Irish freely, which the British also tried to prevent.

All of this was illegal. The teachers were outlaws who risked serious punishment if caught. While teachers were not often arrested, they lived with the constant risk. They weren’t paid a salary, of course. Instead, parents sent farm produce along with the children as payment.

Like much in rural Ireland, hedgerow schools were an open secret. Locals knew who the teachers were and were they held their classes. The British might have had some ideas about the hedgerow schools and preferred to look the other way, but they definitely did not know much. Teachers were held in high regard, and parents would not endanger the person trying to help their children.

Students today might grumble and complain, but few would trade their IT-equipped schools for a damp hedgerow. Their ancestors still had to get up early, but it was to work the farm instead of sitting in a classroom. Most Irish school children today wear uniforms, which of course gives them something to complain about, but in those hard days, few had shoes. Today, when we look at Irish gifts such as Celtic crosses and the literary works of authors from James Joyce to Maeve Binchey, we are looking at the result of centuries of defiance. And those hedgerow schools are a poignant symbol of resilience, hope and determination.

Before Ireland Was Green