Here are the top 7 symbols that have found themselves onto Irish and Celtic jewelry.

It’s fair to say that a lot of Irish Jewelry is made by drawing upon inspiration from Irelands rich Celtic history and culture. Attributed and with thanks to the ancient Celtic people, Irish and Celtic jewelry is mysterious and rich in meaning with its distinctive symbols, storytelling properties, and metaphors.

The origins of Irish and Celtic Jewelry date back to between 2000 BC to around 550 AD when Celtic craftsmen used gold and silver to create beautiful jewelry adorned with Celtic Symbols.

For the ancient Celts, symbols played a vital role and had hugely powerful and meaning in their lives. Symbols from back then to the modern-day deeply reflect both Irish and Celtic beliefs and traditions.

The Celts passion for fine jewelry is well documented, as is their talent for metalwork and craftsmanship. The jewelry styles of the ancient Celts and styles influenced by the Celtic people are interesting and nowadays are adored by people all over the world.

Trinity Knot – The Celtic Symbol of Earth, Wind, and Water

Many believe that this symbol represents the pillars of early Celtic Christian teachings of the Holy Trinity (God the Father, the Son, and the Holy Spirit).

The Trinity Knot appears throughout Ireland. It can be seen and recognized in old manuscripts such as the Book of Kells, on stained glass windows within church settings, and on Celtic crosses and monuments from the early Christian period.

In modern days, the Trinity Knot is used as a token of never-ending love. The symbol represents the three promises of a relationship, to love, to honor, and to protect. It is an elegant design on wedding rings, necklaces, and earrings and you can view our range here.

The Celtic Cross has been present in Ireland from the early Middle Ages.

Some say the circle within the design represents the Sun and was used by St.Patrick to help convert the natives.

The four quadrants may also represent the four seasons of the year or the four stages of the day: morning, midday, evening, and midnight. 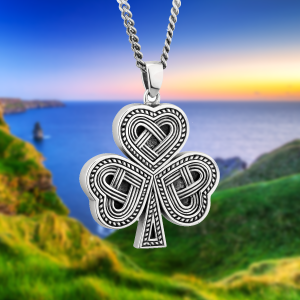 For the ancient Celts, the Tree of Life symbolized balance and harmony.

Did you know – You can spin this Celtic symbol 180 degrees and its appearance remains the same.

Known in Irish as ‘Crann Bethadh’, this Celtic symbol represents the link and association between heaven and earth. The Celts believed that the trees were the spirits of their ancestors, providing a link between their earthly life and the next.

The Celtic Tree of Life symbol represents strength, longevity, and wisdom, all of which were attributes that the Celts revered. 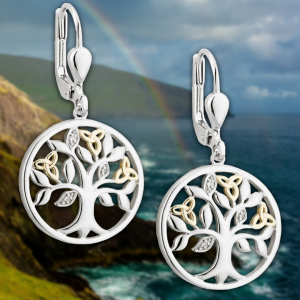 The word Claddagh is the name of the coastal village off Galway, on the west coast of Ireland, where the design was invented by Richard Joyce.

The Claddagh is one of the most popular ring designs today on our website.

You can of course now find the Claddagh symbol on all kinds of jewelry and many other gift items, but it has become an especially popular ring design that is exchanged between friends, partners, and spouses.

The meaning behind the Claddagh ring and jewelry have become synonymous with countless love stories since it was first created.

This motif for the Claddagh ring is explained in the phrase: “Let Love and Friendship reign”. 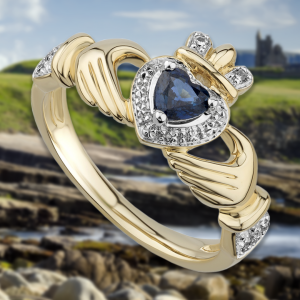 Shamrock – The National Flower of Ireland

Perhaps there is no symbol more synonymous with Ireland than the shamrock; aside from the Irish flag. This tiny bright green three-leafed plant grows all over Ireland and beyond. If you find a clover with four separate leaves it’s said to be lucky.

The shamrock is believed to have been an important Druid symbol in ancient times. According to legend, St Patrick (the patron saint of Ireland) used the flower and its symbol to help explain the unity of the Holy Trinity and convert pagan people to Christianity when he arrived on the island in 43AD.

It is also the symbol you’ll see in every St. Patrick’s Day parade around the world every year.

The Harp – The Celtic Symbol of Immortality of the Soul

The Celtic Harp, Cláirseacht in Irish, is a square harp that is traditional to Ireland and is a unique musical instrument. It requires great skill to play and was associated with the Irish ruling class many years ago.

The harp is one of the national symbols of Ireland and one that Irish people the world over are very proud of. It can be found on Irish passports, signs, and official government documents throughout the Emerald Isle.

Did you know – In 1862 it was used on the very first bottle label for Guinness, a dark Irish stout synonymous with Ireland.

You can view our Harp jewelry here. 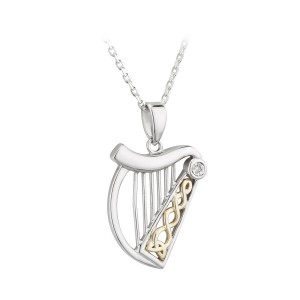 Triskele – The Celtic Symbol for the Flow of Nature

Triskele and its name come from the Greek word “Triskeles” meaning “three legs”. From its unique design, you can see where this link comes from. The Triskele is a complex and enduring ancient Celtic symbol that is often referred to as Triskelion. Its earliest creation dates back to the Neolithic era because it can be seen at the entrance of Newgrange, Ireland.

Did you know – The spiral and the triple spiral are among the oldest spiritual symbols created by humans.

The Triskele or Triskelion is a symbol that consists of three interlocked spirals. It is one of the oldest Irish Celtic symbols and is most commonly known to represent the three worlds; the celestial, physical, and spiritual. 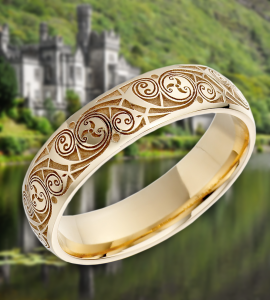 Why not choose a meaningful piece of Irish jewelry for yourself or your loved one here.