The Meaning of The Claddagh Ring

History of the Claddagh

The Claddagh ring has become iconic the world over thanks to the spread of the Irish people across the globe over the past one hundred plus years. The symbols of the Claddagh ring are love, loyalty and friendship, and these have become synonymous with countless love stories since it was first created.

A design that is widely recognized by all those who live in, visit or explore Ireland, the Claddagh has long been known to be a token of love, loyalty and friendship. Known around the world, this grouping of a heart wearing a crown and being clutched by two hands holds a long history and a deep meaning to those who gift it and

Although the Claddagh ring is steeped in Irish history, very little is known of its history aside from folklore. Dating back to the 17th century, the Claddagh design is said to have originated from a small fishing village on Galway Bay. There are two popular stories of how the first Claddagh came to be, both of which are associated to the Joyce name.

Margaret's story is of a Galway native who inherits her Spanish merchants' husband's wealth. Upon her husband's death, Margaret returned to Galway and used her wealth to build bridges in Galway and Sligo. The story says that an eagle dropped the first Claddagh ring into her lap, as a thanks for all her work and charity in the community.

The story believed to be most accurate involves Richard Joyce and tells of an adventurous silversmith who is captured while en route to the West Indies by Algerian corsairs and sold into slavery. Richard Joyce was bought by a goldsmith whom admired his skill and had him work as an apprentice. Joyce was later released from slavery upon the order of William III of England and returned to his native Galway, where he set up his own jewelry business. It is here that he designed the now iconic symbol, and it has been said that his initials are engraved on the earliest known Claddagh ring.

In the old days, Claddagh rings were worn widely by women on the west coast and small islands off Galway. Back then, a Claddagh ring represented the sole major investment of a local fishing family. Within Irish families the Claddagh rings were handed down from mother to daughter. Now, many couples, even those not of Irish descent, from across the world are choosing the Claddagh symbol for their engagement and wedding rings. Claddagh rings became widely known in America for example after Irish immigrants brought them over, mainly in the 18th century. They have simply become symbolic of Irish heritage worldwide.

This motif for the Claddagh ring is explained in the phrase: “Let Love and Friendship reign”. 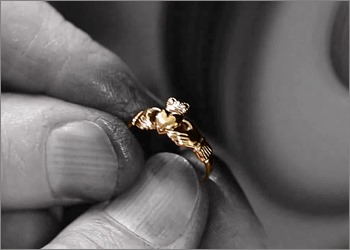 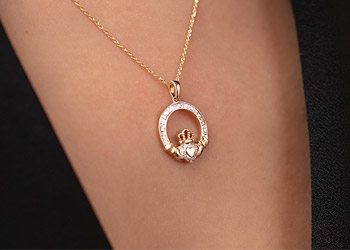 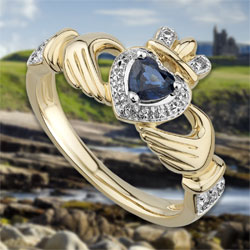 See all of our Claddagh jewelry here.

The meaning of the Claddagh

Steeped in tradition, the meaning of the Claddagh ring has varied throughout the years and dependent on whom is wearing it. The design displays a heart wearing a crown and embraced in two hands.

The hands represent friendship, while the heart represents love and the crown, loyalty. Traditionally known to be a token of love, it is not uncommon for the Claddagh ring to be worn as a wedding ring or an engagement ring.

However, with the meaning also closely tied to loyalty and friendship, it is a popular gift amongst friends or from a parent to their child.

Facts about the Claddagh ring

Myths about the Claddagh ring

Nowadays, a lot of people buy Claddagh rings for themselves, and we are happy to confirm it is a myth that you shouldn't. It is perfectly fine to buy a ring for yourself. The luck of the Irish will be with you if you purchase the ring yourself or someone gets it for you!

Not at all! Many people across the world wear their Claddagh ring proudly due to their heritage or particular interest in its story. We can 100% confirm that the initial tradition of this ring has well and truly moved from beyond the West Coast of Ireland to the corners of the world. We believe there is a very strong connection between the Claddagh ring, its history and people who wear them. That is why the story of the Claddagh ring is truly global.

This one we can confirm as another myth or misunderstanding. Traditionally this may have been the case but it is now a much broader product and present for colleague, family and friends. Based on our experience and who we have sold to over the past number of years we are seeing more and more people buying Claddagh rings for their friends and families which is great to see.

How to wear a Claddagh ring

Historically, the Claddagh ring has been used as a token of love and a way for the wearer to display their relationship status. If the wearer is single, the ring can be worn on the right hand with the heart facing outwards.

If the Claddagh ring is to be used as a wedding ring, it should be worn on the left hand with the heart facing inwards. However, as the Claddagh design also represents Loyalty and Friendship, it can be worn in whichever way the wearer sees fit. Nowadays the Claddagh is seen on a variety of bracelets, necklaces and earrings. 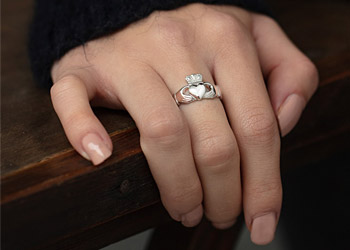 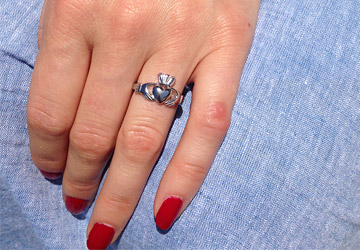 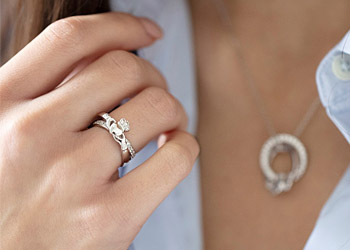 The Claddagh design in fashion and royalty

In more recent times, the Claddagh ring has grown in popularity outside of Galway and outside of Ireland. It is said to be the only ring made in Ireland to be worn by Queen Victoria, this ring was crafted by Dillon's of Galway, the longest standing jewelers since 1750 and an original maker of the Claddagh. Other monarchs known to have had the Claddagh ring include Prince Rainier and Princess Grace of Monaco.

The Claddagh design in its growing popularity has been adapted to create meaning for all those who wear it. Adapting from the original smooth finish, it is popular to have a gemstone set in the heart of the design, usually a birthstone or even a precious diamond.

See all of our Claddagh jewelry here.