484
1
By IrishShop+
7 months ago
In Ireland Information 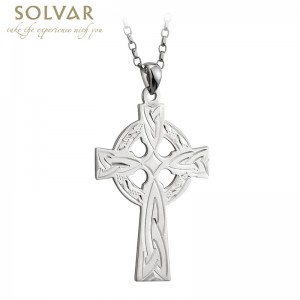 They adorn Irish gifts from pendants to t-shirts, and replicas fill cemeteries across Ireland. But what is really known about Celtic crosses? Obviously, they are a beautiful religious symbol. They are distinctly Irish. But what is their origin? How and when did this part of the world come to have such a distinctive cross symbol? What is the meaning of the ring that makes the Celtic cross so unique? We don’t have a clear historic record of the origin of Celtic crosses, but we do have a lot of scholarly insight based on the many and varied clues our ancestors left behind.

First, what exactly is a Celtic cross? They are the iconic carved stone crosses found around Ireland that have become popular on Irish gifts, particularly jewelry. Their main distinguishing feature is a ring around the intersection of the two lines of the cross. Celtic crosses are tall rectangles, not squares, and the ends are often flared. Typically, they feature detailed engravings depicting scenes from the Bible.

Symbolism of the Celtic Cross

Those engravings back up the theory that these crosses were originally used to designate areas for events such as worship and teaching. Legend tells us that St. Patrick devised them as part of his efforts to spread Christianity in Ireland, although other legends credit St. Declan. But not all Celtic crosses are engraved with illustrations of Bible stories. Some feature decorative carving. Their locations also suggest that some Celtic crosses were boundary markers. Some believe they were erected to announce the area had been converted to Christianity.

The ring at the intersection is called a ‘solar wheel’ and the general shape is referred to as a ‘sun cross’. Pre-Christian Ireland was intently focused on the sun’s movement, as many Neolithic sites such as Newgrange and Loughcrew show. We don’t know for certain why our ancestors combined the symbol of the cross with the symbol for the sun. One theory is that it was intended to communicate that Christ was as important as the sun and get people’s attention. Another suggests that it was a way of saying that Christianity was eclipsing the old beliefs. And of course, a circle does not always represent the sun. In Celtic art, it has also represented infinity, which links to the Christian belief in an eternal afterlife. Plenty of Irish gifts are decorated with pre-Christian symbolism featuring circles, swirls and spirals, and they are generally understood to represent infinity.

Irish gifts aren’t the only type of Celtic crosses left. Some of the crosses carved centuries ago are still standing. The Cross of the Scriptures at Clonmacnoise in County Offaly is a highlight of visiting this incredible site on the shores of the River Shannon. Kells in County Meath’s Boyne Valley boasts four Celtic crosses dating back to the ninth century. Three more are nearby in Monasterboice, a site that includes a round tower and two church ruins. Further south, County Tipperary has two high crosses in Cashel and Roscrea. Both have been moved indoors for protection and cement replicas stand in their original locations. It might be a long, long way, but it is worth it see them.


Giant’s Causeway: the Science & the Story